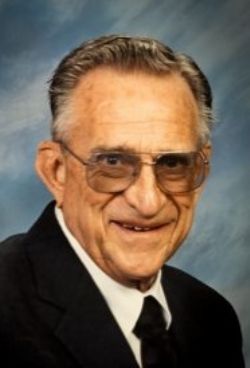 Jim was born in Bismarck, ND on December 23, 1930. He was the eldest of six siblings, survived by sisters Sandra Kirkegaard (Walter) and Debbie Rothweiler (Dave) of Great Falls, MT. The family moved frequently over the years, and Jim spent many of his early years with his grandparents in Illinois where they managed a Boy Scout camp. The summers at Camp Kiwanis provided many memorable experiences for a young boy.

At the age of 13, Jim began spending his summers as a hired hand across several North Dakota farms. From driving a team and milking cows to shocking grain and operating tractors, once careening downhill in high gear while clinging to the steering wheel as he bounced around on an old spring saddle seat, he learned the value of hard work and personal integrity.

While in high school, he had the good fortune of meeting Marlowe Grindler, whose family owned a farm in Rogers, ND. Jim's time living and working on the Grindler farm was the best period of his youth. The family had a band, The Five Gs, that traveled to barn dances in a '41 Ford with a bass fiddle strapped to the roof. Jim often joined in as a singer. The time at the farm was hard work, but he lived with a wonderful family and they remained lifelong friends.

In 1947, Jim joined the Army Air Corp and served in aircraft maintenance for the newly formed USAF. Although stationed in many exciting global locations, it was his time at Reese Air Force Base in Lubbock, TX that was a turning point. Here he was introduced to JoAnn Cornelius on a blind date. The rest, as they say, was history, and they married in September 1951.

While raising their family, the USAF tours took them full circle from Lubbock, Kansas, Bermuda, Wichita Falls, New Hampshire, and back, where Jim retired in 1967 as a Chief Master Sergeant after 20 years of service. Along the way, Jim was made a Crew Chief on B-25 aircraft, and earned numerous promotions and awards, including Airman of the Month.

In 1965, he was named Outstanding Airman of the Year for the 494th Bombardment Wing, where he served as chief of the plans branch for the SAC Wing's deputy commander for maintenance. His Colonel noted that Jim's job performance, leadership, integrity, and personal behavior were above reproach.

After retirement from the military, Jim worked for Litton Industries and Hughes Aircraft in numerous production management, engineering, and quality assurance roles. Jim and JoAnn lived in Lubbock, TX, Grants Pass, OR, and Tucson, AZ, and after Jim's retirement in 1991, returned home to settle in Kerrville.

A family man through and through, Jim supported his children in all their endeavors, including serving as a Boy Scout Master and attending every sporting event and band concert for both Jim and Kathy. Over the years, he indulged his family with a menagerie of family pets that he loved, including a chicken that ate rubber bands, a rabbit that ate Cap'n Crunch, a horse that ate everything, a Siamese cat that ate people (allegedly), and so many beloved dogs. The most important, Clanci, most certainly met him at Heaven's Gate, ready to play.

The addition of his daughter-in-law, Nita, in 1971 made Jim's family complete, made even better by his granddaughter, Jennifer, her husband, Shawn, and two great grandchildren, Kyle and Julianne. He was so proud.

Jim's family and friends knew him as gentle, but stern, witty and curious, considerate and tolerate, and respectful and respected.

Above all, Jim loved JoAnn, always calling her his lovely bride. True to their vows, they faced the world hand in hand, caring and sharing, and celebrated 70 years of marriage on September 15, 2021.

Funeral services will be held on Saturday, October 9, 2021 at 10:00 AM at Kerrville First United Methodist Church (KFUMC). In lieu of flowers, memorials may be made to KFUMC or the charity of your choice.

Joanne,
So sorry to hear of Jim's passing, and so glad he gets to meet Jesus face to face! Jim was one of those few, rare individuals that would come in to a young Associate Pastor's office in order to check and see how I was doing. I believe he was grateful I was prepared to pastor, never approaching me like I simply worked for him.
I'm praying you will feel Christ's presence and receive His comfort during this hard time.
In Christ's service,
Mack
(Associate Pastor, First UMC Kerrville, 1997-2000)

May God bless you and give you peace as you grieve.

Loving condolences to Kathy and all the Ashmore family. May Jim rest in peace until you meet him again.