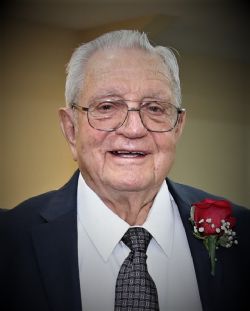 Melvin William Heck, 92, long time resident of Kerrville, passed away Sunday, October 10th, 2021 following a short illness. A funeral Mass will be held November 13th, 2021 at 10 a.m. at the Notre Dame Catholic Church in Kerrville, Texas. A brunch will follow.

Melvin (Mel) was born November 3rd, 1928, in Harold, South Dakota, to Pauline (Kursave) and William Heck, the youngest of their eight children. Melvin's formal education began in a one-room country school-house outside Gettysburg, South Dakota. Typical of the northern plains, he learned life lessons on the farm. His family threshed grain for the east side of the county, whereas his future bride's family managed the west side of town. He married JoAnn Joyce Schneider February 21st, 1950, and they celebrated their 66th wedding anniversary just prior to her death in 2016.

Mel worked odd jobs starting at 13 years of age, which included farm work and road construction. Most notably, he hauled gravel for new road construction leading to the newly completed Mount Rushmore Monument near Rapid City, South Dakota. At 17 he enlisted in the United States Navy near the end of the war. He was proud to be a U.S. Navy World War II veteran, using his skills on the seaplane tender USS Salisbury Sound. He was a recipient of the World War II Victory Medal.

Following his time in the Pacific, Mel returned to Gettysburg, South Dakota, where he served a short time as a local police officer. This experience ignited his interest in law enforcement. Shortly thereafter he served as a police officer at the Black Hills Ordnance Depot, Igloo, South Dakota. Mel recounted that during a card game with his buddies, one of the guys mentioned a flyer that was posted recruiting new Border Patrol Agents. None of them knew what the Border Patrol was, but on a bet on whether they could pass the civil service exam, Melvin and one other ended up passing the exam. That challenge led to Mel pursuing a new and fulfilling career with the United States Border Patrol.

Mel began his career with the Immigration and Naturalization Service, United States Border Patrol - Class #52, which stretched from 1953 until his retirement in November of 1983. He entered on duty as a Border Patrol Agent on the southern border in Rio Grande City, Texas, followed by Edinburg, Texas before taking a transfer north to Grand Forks, North Dakota. In February of 1961, he was promoted to Supervisory Border Patrol Agent at the Havre Border Patrol Station in Havre, Montana, where he served nearly 18 years. He later advanced to the Station Senior (Patrol Agent In Charge) at the Station. In 1979, he accepted a promotion to Assistant Chief Patrol Agent at the Marfa Sector, Marfa, Texas where he completed the last four years of his career, retiring in 1983. Back then, retirement was mandatory at age 55, otherwise; Mel would have stayed longer in the Patrol if given the opportunity. During his career, he had numerous detail assignments, most notably: the Hungarian Refugee Resettlement Program - 1956; Wounded Knee uprising in Pine Ridge, South Dakota - 1973; Vietnamese Refugee Resettlement Program - 1975, and Chula Vista Sector (San Diego Sector) border operations - 1970s.

Following his retirement, he worked as a rehired annuitant for U.S. Legalization in Lubbock, Texas. That lasted about 18 months and he was ready to fully retire. Melvin exemplified the description and watchword coined by the 1927 Commissioner General: ''The border patrol is a young man's organization; it appeals strongly to the lover of the big outdoors - the primeval forests, the sun-parched deserts, the mountains, and the plains; the business upon which it is engaged calls for manhood, stamina, versatility, and resourcefulness in the highest degree. Honor first''. Mel was a competitive shooter with many top gun trophies, an experienced gun smith, a cowboy and horseman and a friend to many people. He was a man of integrity and a mentor and example to many younger agents as well as respected by many in the local, County and State Law Enforcement community. Mel was one of the good guys.

Following Mel's retirement, during their travels, he and JoAnn fell in love with the Texas Hill Country and chose to make Kerrville, Texas their home in 1985. Mel's days were spent remodeling their home followed by the restoration of his 1931 Ford Model A automobile. His hobbies and ability to ''fix anything'' blended well with his membership in the Kerrville Classic Car Club. Until recent years, weekends included numerous car shows and ushering and Knights of Columbus activities with the Notre Dame Catholic Church in Kerrville.

The family wishes to thank the special caregivers that assisted these last years: Renée Reyer, the Brookdale staff and those at the Hilltop Skilled Nursing Facility. Memorials may be made to your local chapter of ALS (https://www.als.org/donate), the Freeman-Fritts Animal Shelter of Kerrville, Texas (www.freemanfritts.com) or any organization of one's choice.

Our deepest heart felt condolences on the passing of your dad. May he RIP. VAYA CON DIOS.

So sorry to hear of your dad’s passing. We will keep you in our prayers!

I am so very sorry hearing of Great Uncle Melvin. Although I don’t remember ever meeting him, I do remember Grandma Meis and my Mom talking about him. I am pretty sure as a child we probably did visit but so many years have dulled the memory. I wish all of his family and friends many, many prayers to see you though your loss.
Cindy King

Heck Families!! Oh it has been so long since I've seen any of you... My thoughts and prayers are with you all!! He was Mom & Dads best man, so I'm sure they have some catching up to do!!! Rest in Peace Uncle Melvin!!