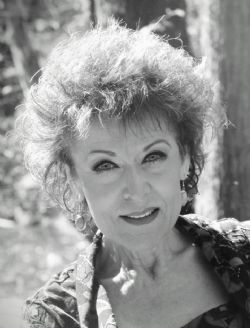 Verna Aleta Domingue (Roberts), 71, of Kerrville, Texas, passed away unexpectedly on November 13, 2021 in Real County, Texas. Aleta was born in San Antonio to William Glendon Roberts and Dorothy Ann Roberts (Eckhart) on May 10, 1950. She married Louis Dean Domingue on October 13, 1979 at the First United Methodist Church in Bandera, Texas. In 1985, Aleta converted to the Catholic faith after a profound spiritual experience, such conversion culminating in her baptism, the blessing of her marriage, and the conditional baptism of her two oldest children in the Catholic Church. Aleta and Dean waltzed through life and love for 42 years.

Aleta attended Bandera High School, served as a member of the National Honor Society, and performed in the high school marching band as a twirler and later led as drum major. Starting even before this point, Aleta played the organ and piano for Bandera United Methodist Church and St. Christopher's Episcopal Church in Bandera, continuing her musical ministry throughout high school, alongside her scholarly and marching band responsibilities. Aleta participated in the Methodist Youth Fellowship for several years, serving as President of the Kerrville District Council in 1967-1968. Aleta graduated from the School of Communication at the University of Texas at Austin with a degree in Radio, Television, and Film. She worked in the advertising industry in Dallas for a number of years before moving with her young family to Kelly Creek Ranch near Ingram, Texas. Later, she continued to raise her family in Kerrville. Aleta was a homemaker and mother as well as a beloved piano and organ accompanist for Notre Dame Catholic Church in Kerrville for many years, a piano teacher to several local students, a mentor to young people, an accompanist for other churches in the Kerrville area, a second violinist in the Symphony of the Hills, the leader and violinist of the musical ensemble The Andante Group, a lifetime member of the Bandera Fine Arts Club, a composer of spiritual and devotional melodies, and most recently, a member of the ladies' club at Apache Rifleworks.

Aleta had a deep spiritual life and a close relationship with God through the intercession of the Virgin Mary. In the year prior to her death, she spoke of reaching new frontiers of her spiritual development, and of eventually losing her fear of death. In the final months of her life, Aleta lived in a near-constant state of prayer, closer to God than ever. All her life, Aleta used music, joy, and compassion to inspire those around her to praise God in everything. She taught her children and grandchildren about the loving and humble example set by Mary, and drew inspiration from the life and writings of Saint Thérèse of Lisieux. Aleta treasured the first words of 1 Corinthians 13:8, "Love never fails."

Aleta is preceded in death by her father and mother, Glendon and Dorothy Ann Roberts.

Aleta is survived by her husband Dean Domingue of Kerrville; her sister Leeannah Russo (Roberts) of Honolulu, Hawaii; her son Glendon Domingue and his wife Jessica of Portland, Texas; her son Bowman Domingue and his wife Raychel of Del City, Oklahoma; her daughter Jady Surrounding and her partners Rob and Morgan of New Orleans; her grandchildren Sebastian, Christian, and Patrick Domingue, and Colt Latham, of Portland Texas; her childhood and lifelong friends Joy Richter, Mona Thaxton, and many others; and many extended relatives, musical collaborators, and friends inspired by her love for God and His people.

A vigil will be held from 4:00 to 6:00 p.m. on Friday, November 26, 2021 at Grimes Funeral Chapels in Kerrville, with a rosary following immediately after, at 6:00 p.m. Funeral services will be held at 10:00 a.m. on Saturday, November 27 at Notre Dame Catholic Church in Kerrville, with committal at Bandera Cemetery following. Flowers may be sent to Grimes Funeral Chapels, or donations may be made to the Music Ministry of Notre Dame Catholic Church. Aleta always urged wearing colorful clothing to funerals, saying that funerals not only celebrate the life of the person who passed, but also celebrate resurrection in Christ as well as Christ's own resurrection.

Aleta was a dear friend and will be greatly missed. Although I was older we knew each other well through school and church activities My prayers and sincere sympathy are with her family.

I have known Aleta for almost 25 years. We did music together. Symphony of the Hills, weddings, church… She was a great friend and helped me through some difficult times. I loved our talks and music times and I will hold her in my heart!

My heart and prayers are with you for all eternity in Gods name. Amen. May you rest in peace. God Bless your Family intheir hour of grief from Carol(Palumbo) Barefoot and Family

Aleta was my sponsor when I became a Catholic in 2001. She was a loving mother and devoted to her family. Her playing the organ at Mass always enriched the sacred time of worship. +May her Memory be Eternal!

I had the honor of being Aleta’s school mate throughout our careers at Bandera Schools. Love and peace, Aleta!

I had just recently met Aleta and was so impressed by her personality and willingness to help others.

Aleta knew you from the sweet looks you would give me at Notre Dame; you gave me a lot of hope. knew you from reading your meter and after all the strays we adopted the kids and me, finally through you and your sister, got a dog i had always wanted, a chihuahua, Maggie; she was the first of the series and as always-mostly-strays and rescues. she is wagging her tail for you now as you are with her on the other side.

Aleta, you were a pleasure to be around. You were kind and gentle with my children and all who knew you. I knew you for many years and enjoyed singing in our church choir with you as a piano accompanist. Our boys will always treasure the memories of you helping them and accompanying them while playing in the choir. Every one in my family will miss you, Aleta! May God bless your soul.

I'm so sorry to hear of your loss. I knew this precious lady from our childhood school years. She was full of joy and love for others. Blessings.

Aleta was a dear friend & I will miss her very much. We grew up together and went to church & school together. God blessed
my life through her & I am positive she continues to sing & play God’s praises. My prayers go out to her family & other friends.

Aleta was a dear friend & I will miss her very much. We grew up together and went to church & school together. God blessed
my life through her & I am positive she continues to sing & play God’s praises. My prayers go out to her family & other friends.