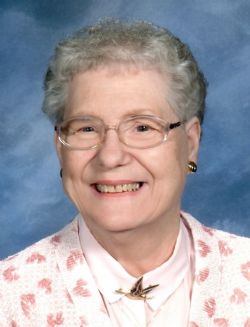 Mrs. Nugent was born in Overton, Texas on January 3, 1934. She spent most of her childhood in Sundown, Texas where she also graduated from high school. On December 31, 1952, she married the love of her life, Byron Mac Nugent. She raised three sons, Wayne, Bill, and Jim, in Big Spring, Texas and was very active in her children's lives, including becoming a Cub Scout leader and president of the PTA. In 1972, when her children were teenagers, Barbara became an LVN. She worked several years as a nurse, including time at the VA hospitals in Big Spring and Kerrville.

Barbara was a member of Eastern Star of Kerrville. She enjoyed playing all kinds of card games, and she was an excellent bridge player. No matter the game, she was extremely competitive and took no prisoners. Barbara was well known for her house remodeling style. She never met a wall she couldn't take down with her hammer. She made the best jalapeno jelly and coconut cream pies.

Barbara's family is thankful for the attentive love and care she received at the SPJST Assisted Living Community (and especially the Memory Care team) in Taylor, TX.

The family requests memorials be made to the Alzheimer's Association or to the charity of your choice.

So very sorry to hear about Aunt Barbara! Our thoughts and prayers are with you all!

I am saddened to hear about the passing of Aunt Barbara. I always had fun around her when we would go to her house.
My thoughts and prayers are with the family.
Cleo