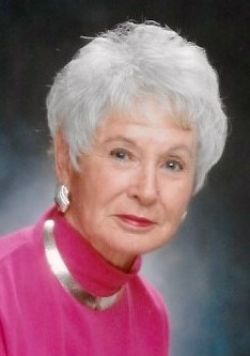 Born September 10, 1931 in Galveston, Texas, Joyce grew up in Shreveport, LA a few houses down from her future husband Walter. She graduated from Byrd High School in Shreveport and studied art at Northwestern State University of Louisiana. She married Walter on January 24, 1953.

Joyce and Walter spent their married life in Jackson, MS; Houston, TX; Richmond, TX; and Center Point, TX. She took private art instruction in Jackson and enrolled in the Glassell School of Art in Houston where she was also a signature member of the Watercolor Society-Houston and the Texas Watercolor Society. She also learned to play golf and when the family moved to Richmond in 1973, they joined Fort Bend CC and spent many hours on the golf course. Their retirement plan was to live in Texas Hill Country, so in 1986, they bought land near Center Point, began building their home and joined at Riverhill CC. Eventually, in 1992 she and Walter retired permanently to their property near Center Point, and Joyce began to pursue her art further. In 1994 she became a founding member of an art critique group, Visions 10, whose other members became her dear friends. She was also involved at the Hill Country Arts Foundation in Ingram, TX and entered her artwork in various juried competitions including those sponsored by the Kerrville Art Club. Her artwork won or placed in many of the competitions. At one time she was represented by the Guadalupe Art Dogs Gallery in Ingram.

The family wishes to extend our sincere thanks to the staff at Peterson Regional Medical Center, Peterson Hospice and Hilltop Village for their tender care of Joyce.

An informal celebration of life will be held at a later date.

I enjoyed knowing Walt and Joyce, really nice people. They helped me greatly the night my son died. I am deeply indebted to them.

Heaven has gained another angel, this one a very artistic one. I’m glad I had the opportunity to know her.