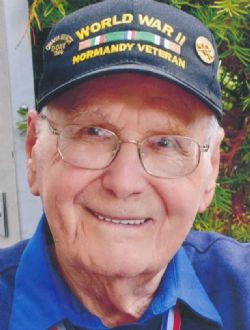 Vernon Lee Roy Ollar was born into the Depression on July 26, 1921 at Moline Public Hospital in Moline, Illinois to Harry Charles and Velma Ollar. He attended school in Rock Island, Illinois and found early in life love of family, belief in God, integrity, hard work ethics, and love of country were to be his destiny. He joined the Civilian Conservation Corps for six months, a government program to help young men go to work and learn new trades. He found work for awhile at a car dealership, Farmall Tractor factory, and then the Rock Island Arsenal manufacturing for the war effort. Vern and Jayne Thomsen were married in 1941 and a baby girl arrived along with the threat of war. He could have taken the easy road, because he was exempt with a job at the Arsenal but did not reveal he had a wife and baby and enlisted in the US Army for a tour, from 1942-1945.

After training for possible Asia, Africa, Italy, or Europe deployment, they shipped out to England with the 116th Regiment of the 29th Division assigned to the Chemical Mortar Battalion. Trained and equipped to face chemical warfare, thankful to find out at the last minute, the treaty had been signed to never use chemicals again.

Landing in an LCVP with their squad and 300# 4.2 mortar with cart, earned them a presidential citation when something hit the rear of their boat and they had to abandon ship and transfer all their equipment into another landing craft. They had wrapped the 20 or more Mae West life preservers around the mortars, so they would come up from the bottom and partially float to shore. Struggling between mines and artillery fire, they made it to shore a half mile from target at H Hour plus landing on Omaha Beach, Normandy. It took all that day to get up the cliffs there pulling everything by hand. The boats with the jeeps all sank. From there to Germany, their unit was always moving around supporting other infantry and Ranger units on or near the front lines. Vern was taken off mortar duty and put on the radio which put him ahead of everyone else giving co-ordinates. When the war ended, he had 98 points, which made him eligible for discharge, but he was sent to help the Army test new Mortar equipment in the Alps. So, he didn't get home till November 1945.

Back home in Moline, everyone else had taken almost all the available GI Bill apprenticeships, but he was fortunate to land one with the lumber yard and learned their trade and most importantly drafting, estimating, and drawing plans. His own company Ollar Hardware Co. Inc. Moline, Illinois was supplying the commercial building companies with commercial grade hardware, acoustical tile, hollow metal and all accessories. Vern was active in local organizations as the Breakfast Optimist club and as a lifetime member of the VFW.

Life at home was full with the addition of three sons and Butch the dog. They all loved to boat on the Mississippi and to travel and explore new places. Two of his sons, Joe and Mike, served in the Army and Navy, with Dave in Florida in the building business. Daughter, Judy Gray, was a well-known artist in the area, with her three sons locating across the river and in Minneapolis. Joe's two sons continue on in the building and construction business.

Retirement gave Vern and Jayne the time to travel and even become snowbirds in the Valley of the Rio Grande in Texas. When in Florida, they were staying at Merritt Island when they witnessed the ill-fated space shuttle that exploded after taking off from Cape Canaveral. Their time together was cut short when Jayne passed in 1996.

Vern continued his active life with repair jobs and building porches and tool sheds. In 2008, he met and married Ruth Diane King in McAllen who added her two sons and families to their extended family, which has grown to 79. Sadly, the Border was only a mile away from their home there and they left when it became unsafe and moved to Ingram, Texas in the infamous Hill Country.

Lucky for Vern, he was chosen to take Flight 9 of the Alamo Honor Flight to Washington D.C. He met several dignitaries including Bob Dole. Next, he was given a week end and tour of the Ft. Leonard Wood base where his 29th Division was home based. Next surprise came when in 2014 he was invited to San Antonio to receive the French Legion of Honor presented to several of his group. On the 70th anniversary of D-Day, Vern and 28 of his fellow veterans were gifted from the Greatest Generation in Denver to a 10-day trip to Normandy where they toured the beach, cemeteries and areas nearby. The next great honor came when the 75th anniversary of D-Day he and 21 of his fellows and wives were gifted a 2-week cruise from the WW2 Museum of New Orleans down the coast of Normandy to culminate with a gala attended by over 150thousand friends, family, including his grandson and family, Veterans, Presidents, and Queens, from all over. After surviving Covid-19, the last trip was when he reached 100 he and Diane attended a grandson and a great-granddaughter's wedding by motor home, with one in Tennessee and the last one in California. A quote from his honor flight friend is "Men like Vern Ollar, who stood up for freedom and the American way of life, will always represent the best version of America." Vern, you have had this last battle and won, When we see the red Challenger zooming down the road we'll think of you.

So sorry for your loss . I had the pleasure of meeting Mr. Ollar by becoming his pest control provider . He was a great man and a pleasure to talk to. Mrs Ollar is also a great pleasure to talk with . I serviced their home for a few years until I retired last June . Rest in Pease my friend.

I am so sorry to hear about the passing of Mr. Vern. I was honored to get to know him from 2019 to 2022. He was an exceptional man and I will never forget the amazing phone calls we had, even when it was just to say hello. I have thought about Mt. Vern many times over the last year and regret not getting to talk to him and his wonderful wife. I am praying for the Ollar family in this time of grief. God Bless.

Sorry for your loss. Your Dad was a true patroit. LOST touch with u Joe after service till 1978. Saw your was gone. HOPE ALL IS WELL. YOUR dad was a inspiration to all army soldiers.

Joe and Kathy,
So sorry to hear of your fathers passing, Joe. Although I never had the privilege to
meet him, he seemed to have lived a wonderful, successful and adventurous life.
On behalf of me and my family, I would like to offer our deepest sympathy. You are in our thoughts. Hugs. Nancy, Shane and Kelly Glisan

Never knew or met the man but a man he was this is the best obit to honor such a HERO I have ever read. RIP Vernon.

Dear Ollar Family,
You don't know me and I never met Mr. Ollar. I came across this obituary when I did a seach for "chemical warfare" and after reading this, I was compelled to offer you my condolences. He was a very brave and intelligent man. I can see from his face that he was a good person. His presence made the wolrld safer.

Dear Diane and Ollar Family.
Jerry and I would like to express our sincere sympathy in your loss. Vern was a dear man who always was friendly. We enjoyed visiting with him and watching him drive his Charger!!